In addition to the DNS changes, I also made some big changes to the design of the site. I am very happy with the changes, and hope y’all are too.

I am making some DNS changes, so there may be sometime downtime while everything propagates.

Makerset is a new company from the folks at Machine Era Co. According to their site, the purpose is to focus on their passion for writing tools.

I remember when Makerset launched the Kickstarter campaign for the Field Pen Compact in early 2018. I thought the pen looked nice but thought it was too small, so I didn’t back it. I am a big fan of the original Machine Era Co. pen, so I couldn’t resist when Makerset reached out asking if I wanted to check out their latest offerings. Even though I was sent these pens for free, that didn’t affect my thoughts on the pen. There is no doubt this thing is small. How small? Kaweco Lilliput small. The Field Pen Compact is 4.12 inches/10.4 cm long, the Lilliput is 3.8 inches/9.7 cm capped and 5.0 inches/12.6 cm posted. The Field Pen Compact is not much longer than a capped Fisher Bullet, as you can see in the comparison photo above. This makes it a perfect size for clipping to a notebook or notebook/pen case combo, or throwing in a bag for jotting down quick notes. Surprisingly, I don’t have any issues holding the Field Pen Compact. The top of the pen rests in the webbing/area between my thumb and index finger, and I have found it very comfortable to hold. I know this will not be the case for those with larger hands. The Field Pen Compact ships with a D1 ballpoint refill and the weight of the pen means you don’t have to apply as much pressure to write with the stock ballpoint refill. The stock refill is a Schmidt-Mine 635 refill, the refill in my brass pen has been more finicky than the one in the stainless pen, with hard starts being the most common problem I’ve had. The refill writes fairly smoothly for a ballpoint refill, and lays down a dark, consistent line. The fact the pen takes a D1 refill means there are plenty of refill options available. The click mechanism is one of the smoothest, and quietest mechanisms I’ve used. It is as smooth as the Schmidt mechanisms used in many machined pens, and just as quiet, that also means it very easy to deploy the refill. The size of the pen is perfect for throwing in your pants pocket, but I would do so with caution because of how easily the mechanism moves. The mechanism is partially made of plastic, and Makerset guarantees the mechanism for life. This was mentioned in the Kickstarter campaign but isn’t listed on the product page, so before writing the review I reached out to Makerset and they confirmed the lifetime guarantee. The Field Pen Compact is a pen that I think is hard to categorize. It is the perfect size for a pocket pen, but the mechanism is so smooth and quiet that it would be easy to unknowingly deploy the refill and possibly ruin a pair of pants or shorts. Because of this, I have been using the pen as I would a regular size pen. For me, this means clipped to my shirt pocket at work or in a pen sleeve in my pocket at home. The small size makes it perfect for quick notes, but the pen is so well balanced that I think it could be used for longer writing sessions, especially if the stock ballpoint refill was swapped with a gel refill. As I said earlier, I didn’t back the pen on Kickstarter because I thought it was too small but was excited to try it out. I thought using the pen would confirm my thoughts on it being too small. I never expected to enjoy this pen as much as I have. This pen is going to be small for a lot of people, but if you have smaller hands, don’t overlook this pen just because of it’s size. Thanks again to Makerset Co for sending these pens for me to review.

When somebody mentions space pen, what pops into your mind? I bet it’s either the fact you can write in very hot or cold temperatures, upside down, and, yes, in space1, or you picture the Fisher Bullet pocket pen, as it is pretty much the only model sold in big-box stores. I have a Fisher Bullet, but it is not my favorite space or pocket pen2. My favorite Fisher pen is the AG7, or as Fisher markets it, “The Original Astronaut Space Pen”. 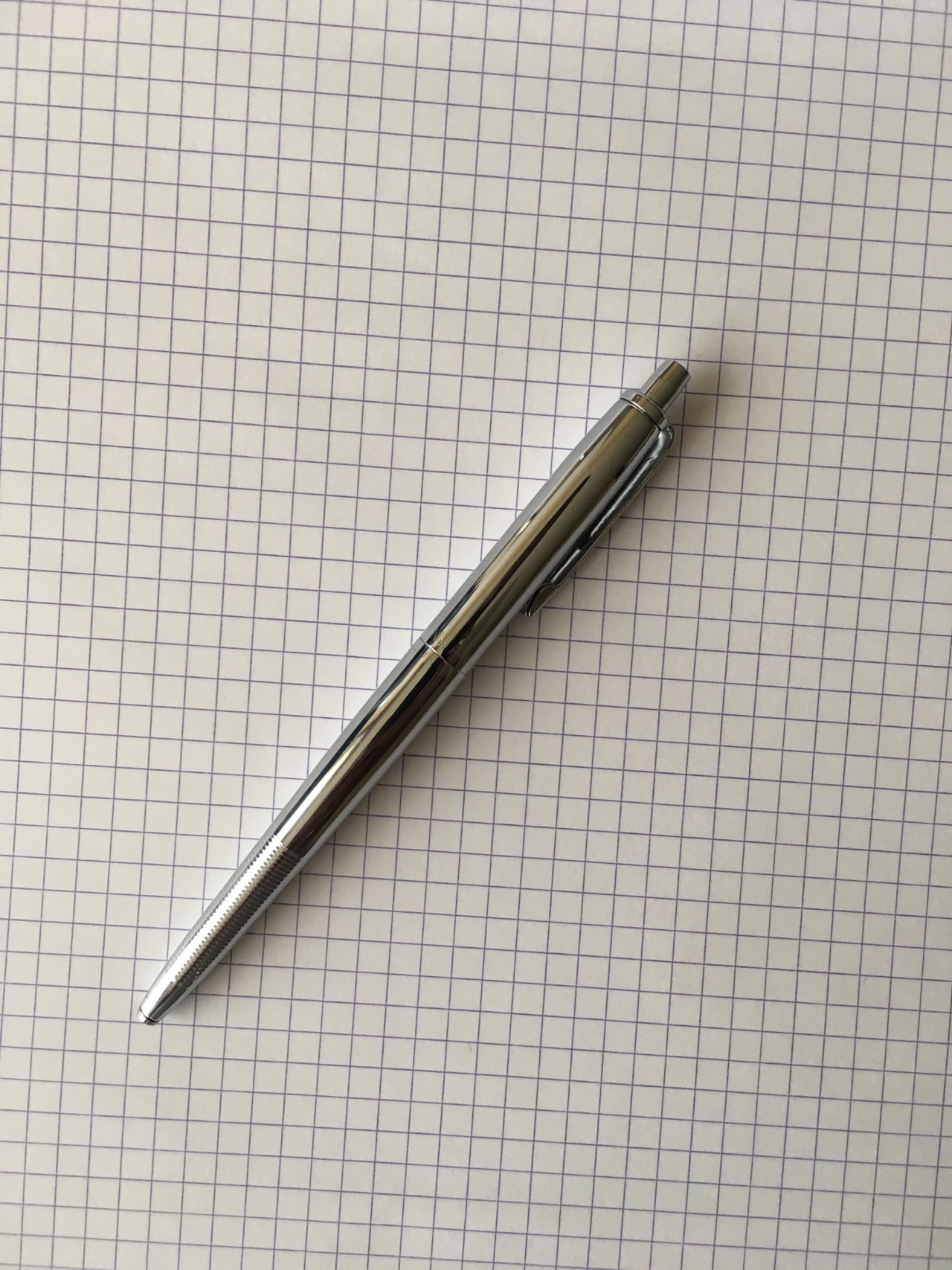 The design of the pen isn’t out of this world3, but it is a timeless, and classic design. I think it could safely be called a retro design at this point, because the design hasn’t changed much, if at all, over the years. The pen is wider at the top and tapers towards the grip section, which has a circular groove to provide extra grip. The pen is made from brass, but doesn’t have the weight of most of the solid machined brass pens available on the market today and is lighter than some of the machined aluminum pens I have. The brass is chrome plated, which gives it a nice and shiny finish, but the chrome finish means the pen is a fingerprint magnet. The chrome finish means the pen can be a little more slippery to hold, but the grooves grip area mentioned above does a really good job of counteracting the slipperiness of the finish. The clip has a nice angle at the bottom which makes it easy to fit over the lip of a shirt pocket, notebook cover, pen case, etc. but the clip still rests against the barrel to provide a nice hold on whatever you decide to clip it to. The clip is mounted to the very top of the barrel which allows the pen to sit very low in a shirt pocket. Compared to the minimal or no branding on many pens today, the branding could be considered a giant flashing billboard. Fisher AG7 is engraved into the clip, and the engraving takes up pretty much clip. “AG7 Space Pen by Fisher..USA..” is engraved around the circumference of the barrel, though the font size is a lot smaller and less noticeable than that on the clip. Even though the branding on the clip is very noticeable, I really like it and think it fits will the overall design of the pen. The click mechanism is one of my favorite things about the AG7. Instead of using the top button to deploy and retract the refill, the AG7 uses the top button to deploy the refill and a side button to retract the refill. The mechanism makes a nice, satisfying click each time. Did I mention that this setup is really fun to play with and fidget with? The buttons are close enough that you can press the top button with the tip of your thumb and press the side button with the knuckle of your thumb fairly quickly to your satisfaction and to the annoyance of those around you.4

I found the AG7 to be slightly top heavy when I first got it, but after using it for a while, and especially after using some machined pens, I don’t notice the slight top-heaviness like I used. The opening of the barrel is a little wider than the refill which means there is some tip wiggle, which means clicky writing due to the refill hitting the side of the barrel. I solved this by unscrewing the barrel and rotating it before screwing it back on, so that the refill was always resting against the side of barrel. 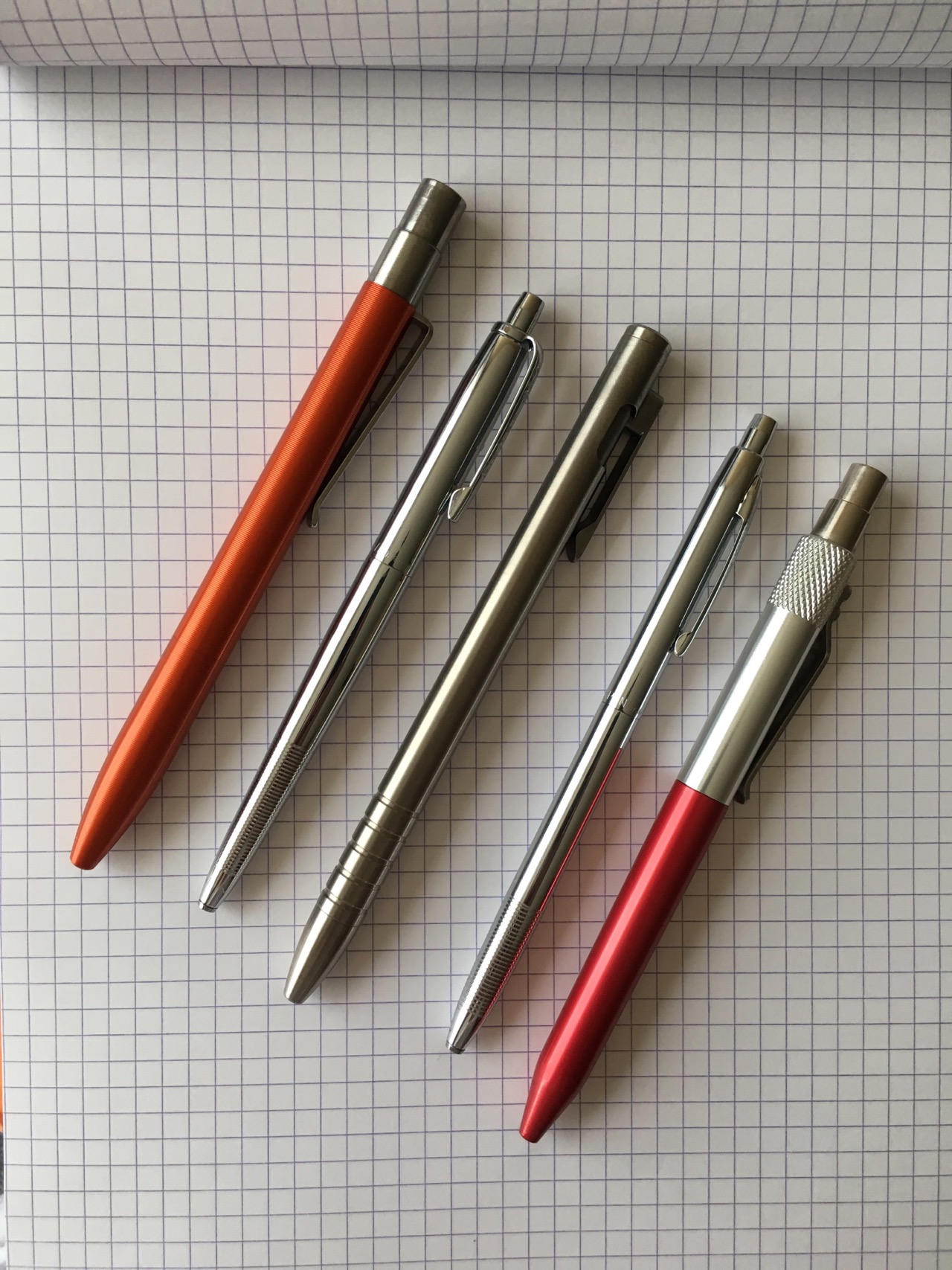 Refreshed in the Wind

This is a post from my other blog Thoughts Aloft. I was re-reading it the other day and decided to post it here as well.

I have always enjoyed watching airplanes take off and land, and fly overhead. As a kid, whenever we drove past an airport I remember looking as hard as I could in the hopes I would see an airplane, even if I knew I wouldn’t see one.1 I can remember my dad stopping on the side of the road to let me watch a plane take off or land. My son is the same way I was as a kid, and yes, I have stopped the car to let him watch an airplane. Why do we do this? I was reminded earlier of a quote from one of my favorite books that I think perfectly describes why.

“”…Here, refreshed in the wind, I rediscover what I had previously held to be certain truths. I again become aware that no pilot alive can resist watching a plane take oﬀ or land. He may pass a motionless airplane without noticing it, but the moment his ears detect the ﬁrst burst of power from a plane, however distant, he will turn his head regardless of everything else around him and watch it. “He will also rudely break off in the middle of a conversation to watch a plane landing, though there may be a constant ﬂow of them. From observance of such activity he enjoys an abiding satisfaction, as basic and everlasting as that found by a deep-sea sailor on his obligatory pilgrimage to the nearest harbor…“” — Ernest Gann in Fate Is The Hunter

The “refreshed in the wind” line has always stuck with me, because of a feeling I sometimes get at airports when the wind is just right. It is a feeling of calm and peace, and it is in those times that I’m even more grateful that I am able to do what I love. I don’t know why I get this feeling when the wind is a certain way, I just do. I get this feeling the strongest on clear days, when the temperature is around 75 to 80°F, and the wind is about 5 to 10 knots. When I get this feeling all I want to do is stop and watch the airplanes take off and land, and simply take in the sights, sounds, smells, and as crazy as it may sound to some, the beauty of the airport. As stressful as my job can get, it is in these times that I am refreshed in the wind, and that I can’t imagine doing anything else.